Question: Who was the president of the Democratic Republic of Vietnam, or North Vietnam, during most of the war?
Answer: At the end of World War II, in August 1945, Ho Chi Minh and his Vietnamese guerrilla forces seized much of northern Vietnam, including the city of Hanoi. Ho then declared Vietnam’s independence and the formation of a provisional government, which he had been named to lead. After the country was formally divided into northern and southern zones in 1954, Ho was president of North Vietnam until his death in 1969.

Question: Which Chinese communist leader supported North Vietnam?
Answer: Mao Zedong of China, in tandem with the Soviets (despite the open hostility between the two), began to provide aid to North Vietnam in 1964.

Question: What was the name of the U.S. surveillance ship that was attacked by North Vietnam in the Gulf of Tonkin?
Answer: The USS Maddox was attacked in August 1964, perhaps having been suspected of involvement in recent South Vietnamese raids on North Vietnam. Days later, the Maddox and an accompanying U.S. ship reported a second North Vietnamese attack. That led U.S. Pres. Lyndon Johnson to secure congressional passage of the Gulf of Tonkin Resolution, which authorized him to take any measures he deemed necessary to deal with future threats to U.S. forces or U.S. allies in Southeast Asia. Johnson’s handling of the situation contributed to his victory in the November presidential election.

Question: What event of the war caused many Americans to realize that, contrary to what they had been told, victory was not near?
Answer: On the Lunar New Year, or Tet, of 1968, the communist North launched a major offensive in the South after preoccupying its opponents’ troops with diversionary attacks. U.S. and South Vietnamese forces managed, miraculously, to recover quickly from the forceful blow. Many Americans at home, however, had been under the impression that U.S. forces had almost completely contained the North and that victory was in their pocket. The Tet Offensive broke that illusion, and American public support for U.S. involvement in the war dropped.

Question: What was the name of U.S. Pres. Richard Nixon’s plan to enable South Vietnam to fight without a direct U.S. military presence?
Answer: In June 1969 President Nixon announced the withdrawal of 25,000 U.S. troops from Vietnam as the beginning of his Vietnamization program, which aimed to shift the burden of fighting from U.S. forces to South Vietnamese forces while bolstering the latter with added material and advisory support. He intended to withdraw more than 150,000 troops over the subsequent year.

Question: What happened in Quang Ngia province in 1968?
Answer: On March 16, 1968, U.S. soldiers killed as many as 500 unarmed villagers in the hamlet of My Lai, Quang Ngia. U.S. intelligence had believed that a Viet Cong battalion was taking refuge there when in reality it was hiding more than 40 miles (65 km) away. 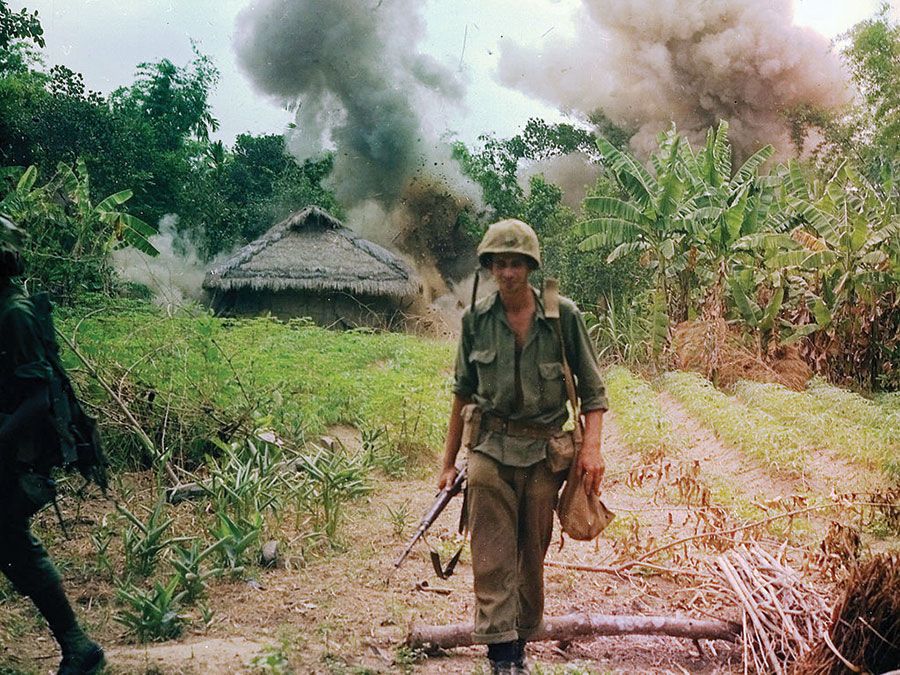 Who backed whom? How was the U.S. involved? Which foreign leaders were involved? Test your knowledge of the Vietnam War with this quiz.

Politics, Law & Government
Australian Government and Political System
Browse All Quizzes
Your results
Question Question {{($index + 1)}}
Your Answer:
{{vm.state.responses[$index].isCorrect ? 'Your' : ''}} Correct Answer:
Are you a quizmaster?
Share Your Score:
Facebook Twitter
Compare your score
Max Score: {{vm.maxPoints}}
New Best Score!
{{vm.state.score|number:0}}
{{vm.communityAverage|number:0}}
Your Score
Community Average
High scores
Login or Join to track your quiz stats, save your best scores, and compete with the community!
Your preference has been recorded
Check out Britannica's new site for parents!