Question: Battle of Shiloh
Answer: Both the North and the South suffered heavy casualties—approximately 10,000 on each side—but Gen. Ulysses S. Grant’s forces prevailed.

Question: Battle of Gettysburg
Answer: The bloodiest battle of the war was ultimately won by Gen. George G. Meade, who had recently been given command of the Army of the Potomac, and his Union troops.

Question: Battles of Bull Run
Answer: Both battles—fought at a small stream named Bull Run near Manassas, northern Virginia—were victories for the Confederacy.

Question: Battle of Antietam
Answer: An important win for the North, it halted the South’s advance on Maryland. Pres. Abraham Lincoln marked the victory by issuing his preliminary Emancipation Proclamation.

Question: Battle of Fredericksburg
Answer: A crushing defeat for the North—Union Gen. A.E. Burnside was relieved of his command the following month—it greatly strengthened the Confederate cause.

Question: Battle of Chancellorsville
Answer: Although the Confederacy won, it lost Gen. Thomas J. (“Stonewall”) Jackson, who was accidentally shot by his own men and later died from the wound.

Question: Battle of Chattanooga
Answer: Added to by reinforcements from Gen. Joseph Hooker and Gen. William Tecumseh Sherman, Union forces under Gen. Ulysses S. Grant forced the retreat of the South, and the win contributed significantly to the Union’s victory in the war.

Question: Battle of Chickamauga Creek
Answer: The bloodiest battle after Gettysburg, it was a major victory for the Confederacy and Gen. Braxton Bragg. However, Bragg failed to capitalize on the win, and the results were soon nullified.

Question: Second Battle of Cold Harbor
Answer: It was one of the worst tactical defeats suffered by the North. However, it did not deter Gen. Ulysses S. Grant from continuing to Petersburg, Virginia, in his drive toward Richmond, the Confederate capital.

Question: Battle of Five Forks
Answer: Part of the Petersburg Campaign, it helped pave the way for the surrender of Confederate Gen. Robert E. Lee a week later, on April 9, 1865. 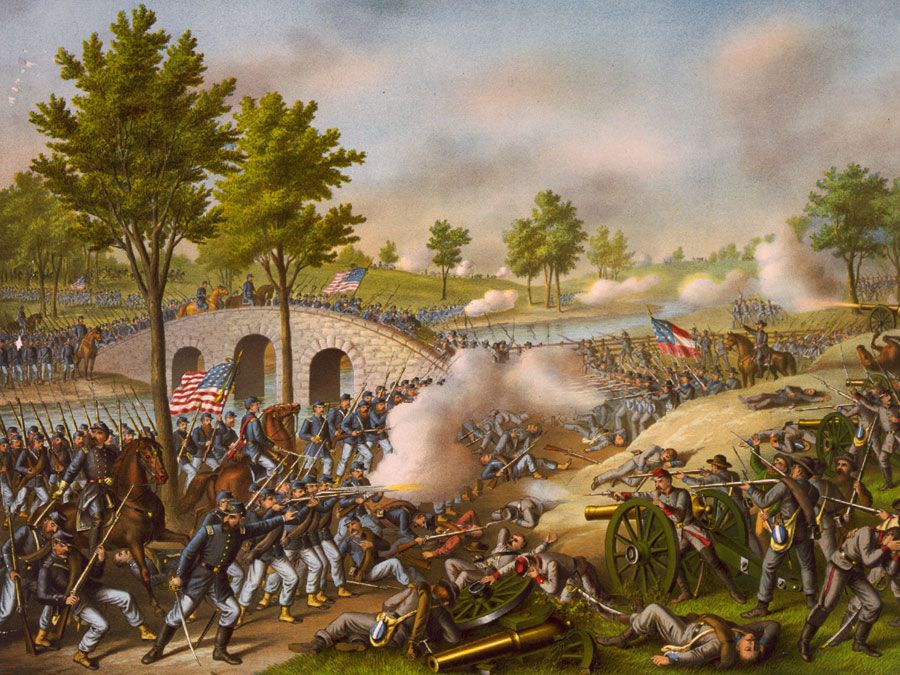 While you probably know the Battles of Gettysburg and Antietam, do you remember who were the victors? Take this quiz to test your knowledge of which side won which Civil War battles.

Philosophy & Religion
Religion Across the Globe

Politics, Law & Government
U.S. Constitutional History Quiz
Browse All Quizzes
Your results
Question Question {{($index + 1)}}
Your Answer:
{{vm.state.responses[$index].isCorrect ? 'Your' : ''}} Correct Answer:
Are you a quizmaster?
Share Your Score:
Facebook Twitter
Compare your score
Max Score: {{vm.maxPoints}}
New Best Score!
{{vm.state.score|number:0}}
{{vm.communityAverage|number:0}}
Your Score
Community Average
High scores
Login or Join to track your quiz stats, save your best scores, and compete with the community!
Your preference has been recorded
Check out Britannica's new site for parents!