You are using an outdated browser. Please upgrade your browser to improve your experience and security.
William Rufus de Vane King
vice president of United States
Media
Print
Thank you for your feedback

William Rufus de Vane King, (born April 7, 1786, Sampson County, N.C., U.S.—died April 18, 1853, Cahaba, Ala.), 13th vice president of the United States (1853) in the Democratic administration of Franklin Pierce. Although elected and sworn in as vice president, he did not live to perform any of the official duties of that office.

Britannica Quiz
American History and Politics
Which document does the Fourth of July commemorate?

After graduating from the University of North Carolina (Chapel Hill) in 1803, King studied law and was admitted to the bar in 1806. He turned almost immediately to politics, serving in the state legislature and later in the U.S. House of Representatives. In the House he was part of the War Hawk faction.

King resigned from the House in 1816 to serve as secretary of legation to William Pinkney, the U.S. minister plenipotentiary to Russia. When King returned in 1818, he moved to Alabama. Again he entered politics, serving in Alabama’s first constitutional convention and later becoming one of the state’s first U.S. senators. In 1836–41 he was president pro tempore of the Senate, and he remained a senator until 1844.

In April of that year, President John Tyler appointed King U.S. minister to France. His mission was to keep France from interfering with the annexation of Texas from Mexico. France did not interfere, and in 1846 King returned to the United States. He ran for the Senate once again but was defeated. Appointed in 1848 to fill an unexpired term in the Senate, he remained in office until 1852.

At the Democratic Party convention that year, King was the beneficiary of Franklin Pierce’s victory over James Buchanan for the presidential nomination. King, a Buchanan backer, was offered the vice-presidential nomination in an effort to placate Buchanan’s supporters. The Pierce–King ticket won the election, but King was too ill with tuberculosis to attend the inauguration in March 1853. Taking the oath of office in Cuba, where he had gone in search of a cure, King became the only vice president to be sworn in on foreign soil. He returned to Alabama a few weeks later, determined to assume his responsibilities, but died the day after he reached his plantation. 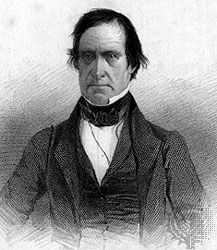