You are using an outdated browser. Please upgrade your browser to improve your experience and security.
Gerald Ford
president of the United States
Media
Print
Please select which sections you would like to print:
Thank you for your feedback

Gerald Ford, in full Gerald Rudolph Ford, Jr., original name Leslie Lynch King, Jr., (born July 14, 1913, Omaha, Nebraska, U.S.—died December 26, 2006, Rancho Mirage, California), 38th president of the United States (1974–77), who, as 40th vice president, had succeeded to the presidency on the resignation of President Richard Nixon, under the process decreed by the Twenty-fifth Amendment to the Constitution, and thereby became the country’s only chief executive who had not been elected either president or vice president.

Where was Gerald Ford educated?

Gerald Ford graduated from the University of Michigan (1935), where he was a star gridiron-football player. He later earned a law degree from Yale University (1941).

What did Gerald Ford accomplish?

After becoming U.S. president, Gerald Ford announced a conditional amnesty program for those who had evaded the draft or deserted during the Vietnam War. Controversially, he pardoned former president Richard Nixon on September 8, 1974.

What were Gerald Ford’s jobs?

Gerald Ford joined the U.S. Navy during World War II and served in the South Pacific, attaining the rank of lieutenant commander. In 1948 he won his first elective office, as Republican congressman from Michigan, and held that position until Richard Nixon named him vice president in 1973. Ford became U.S. president on August 9, 1974.

While Gerald Ford was still an infant, his parents were divorced, and his mother moved to Grand Rapids, Michigan, where she married Gerald R. Ford, Sr., who adopted the boy and gave him his name. After graduating from the University of Michigan (1935), where he was a star gridiron-football player, Ford worked as an assistant coach while he earned a law degree from Yale University (1941). He joined the navy during World War II and served in the South Pacific, attaining the rank of lieutenant commander and nearly losing his life in 1944 during a deadly typhoon that killed hundreds. In 1948, the year he won his first elective office, as Republican congressman from Michigan, he married Elizabeth Anne Bloomer (Betty Ford), with whom he had four children—three sons (Michael, John, and Steven) and one daughter (Susan).

From congressman to vice president and president

Ford served in Congress for 25 years. Well-liked and ideologically flexible, he won the role of House minority leader in 1965 and held this position until Nixon named him vice president in 1973. During his time in Congress, he had developed a reputation for honesty and openness. When Nixon’s vice president, Spiro T. Agnew, was forced to resign from office in disgrace, the president had no choice but to nominate the only Republican whom the Democratic leadership of Congress would approve, the affable Jerry Ford.

In 1974, when it became clear that Nixon would face criminal charges for his role in the Watergate scandal and three articles of impeachment had been passed by the House Judiciary Committee, Nixon resigned, effective August 9. On that day, Ford took the oath of office and became president, stating, “Our long national nightmare is over.” He retained the foreign and domestic policy staffs of the Nixon administration, including Secretary of State Henry Kissinger. (See primary source document: First Address to Congress and the Nation. See also Cabinet of President Gerald Ford.)

One of Ford’s early acts as president was the announcement of a conditional amnesty program for those who had evaded the draft or deserted during the Vietnam War. The most attention-getting act of his years in office, and the move that for many destroyed his credibility, followed in the next month. On September 8, 1974, declaring that in the end “it is not the ultimate fate of Richard Nixon that most concerns me” but rather “the immediate future of this great country,” Ford pardoned Nixon “for all offenses against the United States” that he had committed “or may have committed” while in office. The pardon, later alleged to have been the result of blackmail (that if Ford did not pardon him, Nixon would blacken the new president’s reputation by publicly claiming that Ford had promised a pardon in exchange for the presidency), effectively squelched any criminal prosecutions to which Nixon might have been liable. Afterward Ford voluntarily appeared before a subcommittee of the House of Representatives on October 17 to explain his reasoning—the first time a standing president had formally testified before a committee of Congress. In another startling move, Ford annoyed members of his own party by naming Nelson A. Rockefeller, both a party liberal and a representative of the so-called “Eastern establishment,” as his vice president.

Ford’s administration attempted to cope with the high rate of inflation, which he inherited from the Nixon administration, by slowing down the economy. The result was a very severe recession in 1974–75, which succeeded in lowering inflation but at the cost of an unemployment rate that rose to nearly 9 percent. Despite his WIN (Whip Inflation Now) program, he could do little to stop the country’s economic problems. Ford’s relations with the Democrat-controlled Congress were perhaps typified by his more than 50 vetoes of legislation by the end of 1976; more than 40 were sustained. Legislative gridlock set in.

During the final days of the Vietnam War, in March 1975, Ford ordered an airlift of some 237,000 anticommunist Vietnamese refugees from Da Nang, most of whom were taken to the United States. Two months later, after the seizure by Cambodia of the American cargo ship Mayaguez, Ford declared the event an “act of piracy” and sent the Marines to seize the ship. They succeeded, but the rescue operation to save the 39-member crew resulted in the loss of 41 American lives and the wounding of 50 others. Moreover, U.S. relations with Thailand became strained because the U.S. strike had been launched from a base in Thailand against the wishes of the Thai government.

Twice in September 1975, Ford was the target of assassination attempts. In the first instance, Secret Service agents intervened before shots were fired; in the second, the would-be assassin fired one shot at Ford but missed by several feet. In October he initially refused to consider loans to the city of New York, then on the brink of fiscal collapse, and thereby prompted the newspaper headline “Ford to City: Drop Dead.” As the larger implications became clear, he retreated from his earlier position.

In a close contest at the Republican convention in August 1976, Ford won his party’s nomination, despite a serious challenge by Ronald Reagan, the former governor of California. That fall Ford became the first incumbent president to agree to public debates with a challenger—Jimmy Carter, the Democratic nominee. Ford ran substantially behind from the beginning of the campaign, owing in large part to negative fallout from the Nixon pardon but also to the general public’s perception of his ineptitude. His decisions in office had often seemed to be those of Kissinger and the others left over from the Nixon administration; sometimes, as those made during the Mayaguez incident, they seemed simply ill-considered. He misspoke on many occasions, notably declaring in a debate with Jimmy Carter, “There is no Soviet domination of Eastern Europe” and “I don’t believe that the Poles consider themselves dominated by the Soviet Union,” which journalist William F. Buckley, Jr., called “the ultimate Polish joke.” Even his physical pratfalls, such as hitting his head while deplaning, were well documented for the public. As journalist John Osborne summarized the situation, Ford was seen as

a loser, a bumbler, a misfit President who for some reason or other…was prone to slip on airplane ramps, bump his head on helicopter entrances, entangle himself in the leashes of his family dogs, and fall from skis in front of television cameras that showed him asprawl in snow. 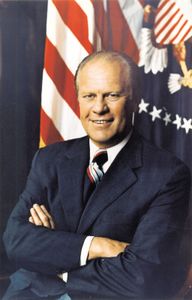